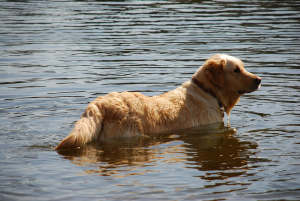 Dogs have risen to the legendary status as man’s best friend. Stories in almost every culture tell of the special bonds that exist between man and his canine best friend.
Our first story from folklore tells of a dog that jumped into the murky waters where the Essequibo River meets the Atlantic Ocean. A jetty separated the flowing river on one side from the beach area on the other.

A father named Jamsie, his son Thomas and their dog Bruno, went fishing in the middle of the night, using the light of the full moon to catch the high tide. This tide offers the best yields of game fish.

Jamsie swung his long line over his head as a dark cloud covered the moon and sent the area into darkness. He built enough speed to launch the heavy lead sinker and dangling hooks into the dark waters. The last swing is usually the most powerful…