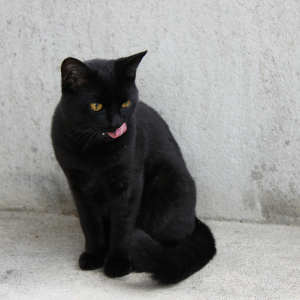 If a black cat crosses your path ahead of you, bad luck awaits. Almost every society associates the cat with sorcery or witchcraft.

Mummified cats that once served as pets for Pharaohs during life, also accompany them in their tombs during the journey of death.
The cat’s independent nature makes it an enigma in the eyes of all cultures.

Guyana is no exception. Folklore is rife with stories of cats. The cat’s uncanny ability to switch from domesticated pet to the wild instinct of their jungle cousins makes them somewhat unpredictable.

There is a true story of a man named Abdul who returned home one day to find that his cat had broken into his bird-cage and ate his prized whistling finch, known to Guyanese as a Towa Towa.

Abdul flew into a rage and decided to teach the cat a lesson. He cornered the animal and prepared to hit it with a broomstick. The cat lounged at Abdul who had just enough time to raise his hand to protect his face. The cat sunk his teeth into Abdul’s palm before fleeing between his legs and out the door behind him.
The feline never returned.

Another story tells of a baby left to sleep in a hammock tied between two trees. A snake in the tree slithered along the hammock’s rope and poised for a strike on the child. The family’s cat sensed the danger and snapped out of his dozing state. He sprang with precision and speed, biting the snake’s head and pulling it off the hammock as he descended on the other side. The snake twitched and curled in the throes of death, unable to escape the sharp teeth of the domestic cat.

T here was also the case of a cat that lived with a couple for a number of years before they had their first child. The cat became jealous when the baby’s parents starting showing more attention to the child.

One day when the newborn was about a month old, the mother entered the baby’s room to find the cat in the crib with his tale covering the baby’s nostrils in an attempt to suffocate the infant.

Folklore tells of a tabby that once dropped a litter of kittens in the home of its owners. The man of the house did not want to keep the kittens. He gathered them into a cotton rice bag and dropped them into a canal about a mile away. The mother-cat had followed him all the way with loud pleading meows that did not succeed in swaying the man’s determination. The cat did not return home and the family assumed that she may have strayed away in her grief.

One day a few weeks later, the wife opened a storeroom on the ground floor of the house. The strong odor of decaying flesh greeted her. The mother cat and her kittens lay in an embrace of death. The tabby had somehow retrieved her dead kittens from the canal and brought them back to the house.
She may have refused to leave them unprotected, even to eat, and died of starvation…

A paranormal story from the book SUPERNATURAL by Kamil Ali.