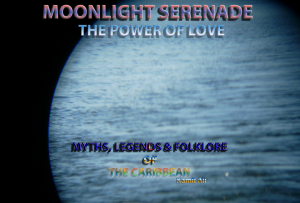 Damah Nooh combed her long black hair and swayed as she sang a serenade to her lover. Her soft golden voice echoed off the surrounding rocks. Her angelic face glowed in the full moon and reflected in the shimmering water of the shallow pool in which she sat. The water from the warm mountain spring captured her beauty, sensual movements and haunting melody.

Climbing over the rim of the waterhole, the flowing water snaked around the rocks of the Pakaraima Mountain and joined the journey of other streams carrying similar messages from other Mountain Nymphs.

The water messengers merged together and grew into ‘The Majestic Potaro River’, sustaining life along its path through valleys and villages and cascading off the edge of a steep rock as ‘The Mighty Kaieteur Falls’.

On full moon nights, young men from the villages along its banks dove into the waters of the Potaro River and lay motionless on its bed, soaking in the heavenly splendor, enjoying the soft caresses and swooning from the hypnotic melodious voices of the Mountain Nymphs.

Eighteen year-old Ahoginii kept a cordial relationship with the members of his tribe but held none close to his heart. Both parents had died a couple of years earlier