The White Sack of Flour 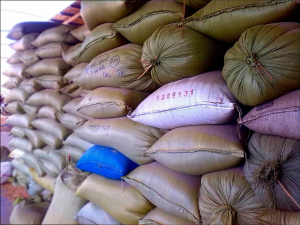 The White Sack of Flour

In the late nineteen-twenties, a young mother breastfed her newborn infant at her rural home’s front window. She moved back and forth and hummed in a soft tone in her rocking chair, as the grandfather clock tolled midnight. She combed through the baby’s thin strands of hair, using light strokes with her fingertips. She blew cool air, as she tried to lift the matted hair off the baby’s perspiration-coated scalp.

She opened the window to welcome a gentle breeze on that hot and humid tropical night. The full moon grabbed her attention with its radiance and its apparent closer-than-usual proximity. She stared at the colloquial “man on the moon”.

She heard the clip-clop sounds of a horse’s metal shoes on the rock and pebble road below her window. She looked down in time to see one of the two large metal-clad wheels sink into a deep hole on the road and hit a rock on its way out. The jolt caused a white cotton sack of flour to become dislodged and tumble off the back of the cart. The driver kept going, as though unaware that he had lost one of his dozen bags of flour.

The young mother got up and ran to the bedroom to arouse her husband. He sprang out of bed at her insistence, reacting to her intent of catching up to the dray and informing the driver of his lost cargo.

The couple returned to the window for the wife to point out the fallen sack of flour. They stared at the empty road. The white cotton bag had vanished!

She started to feel faint and developed an instant fever. She fell onto the rocking chair after her husband snatched the baby from her arms. The husband laid the baby on a blanket on the ground, before administering aid to his wife.

He lifted her and took her to the bedroom. He laid her on the bed and touched her forehead. She shivered from cold sweat and looked pale in the full moon’s beams coming through the bedroom window.

The memories came rushing back to her upon awakening the next morning. The young lady had started to think that she might have imagined the scene she observed at midnight since it did not seem plausible or logical.

She heard a commotion on the street in front of the house. She rushed to the window and witnessed a mule refusing to pass the spot where the sack had fallen the night before.

The mule’s owner whipped him without mercy, trying to push the back of the dray at the same time. The mule bucked and kicked as he refused to advance another inch.

She trembled and swallowed hard when another forgotten detail came to light in her mind. The driver, horse, and cart had looked as white as the sack of flour.

Her recollection of the spectral details and the mule’s behavior convinced her that she had a brush with the paranormal.