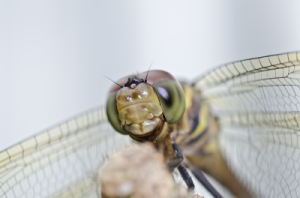 The boys lined up along the edge of the trench, maintaining a safe distance from each other to avoid being caught on a neighbor’s hook. Fishing equipment consisted of a hook-shaped pin at the end of a cotton twine tied to the tapered tip of a slim flexible tree-branch rod. The line passed through a sliced cork, which floated on the water. Sliding the cork along the line adjusted the depth of the bait underwater.

A milk can containing mud and wriggling earthworms stood beside each boy. Covers of cardboard or flat rocks blocked the worms’ escape. The squirming impaled worms in the water attracted tilapia, patwa, and a triangular-shaped, silverfish named, ‘cassee’.

Fish caught, stayed fresh by swimming around in a large tin-can. While the other boys released the undesirable cassee back into the water, Appy avoided re-hooking the nuisance fish by throwing them on land to dry out and die.

The ever-present dragonfly earned its nickname, ‘pondfly’, due to its emergence from eggs laid in ponds. This insect also laid eggs on the sides of the trenches