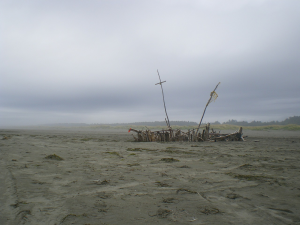 The battered and half sunk wooden sloop bobbed and rolled in the waves of the Atlantic Ocean, drifting toward the shore in a slow dance. The unmanned watercraft with broken mast creaked under pressure from the tidal waters.

The current wedged it sideways into the sand, forcing it to lean toward the curious witnesses. Satisfied with it’s work, the tide retreated, offering it’s delivery as an enigma for curious eyes. The small craft had slipped through the Naval Armada patrolling the coast undetected.

“Port Authority coming through!” Stand back, please!” Four employees of the Port Authority clad in white starched shirts and white peaked hats parted the crowd. With no markings or flags to identify it’s source, they placed a step ladder against the side of the boat and climbed on board to search for identification. Before the last man could board the vessel, they tumbled over each other to get out. Two of them ejected their breakfasts on their rush back to their vehicles. News Reporters jostled each other for prime vantage points. Loud sirens from firetrucks and ambulances blasted late risers out of their beds.