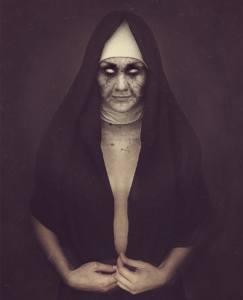 Newlyweds, Phil and Sherry Boden lived a small two-level home in the middle of a rowhouse complex. Phil flipped a hamburger patty on the barbecue while Sherry prepared the buns and salad.

“Did I just see that?” Sherry pointed to the upstairs bedroom window overlooking the backyard.

“See what?” Phil followed her line of vision.

“How can that be?” Phil knitted his brows. “No one’s in the house.” He chuckled. “Probably the air-conditioner blowing air through the floor-vent.”

“It’s not working, remember?” Sherry directed his attention to the broken unit against the back wall of the house.

Sherry jumped and dropped her knife at a loud bang in the house. Phil darted inside, still clutching the large steel spatula. Sherry followed at a safe distance. They discovered the fridge lying front down the kitchen floor.

They searched for a logical explanation but found none. After their joint efforts to lift the damaged fridge back into its place…