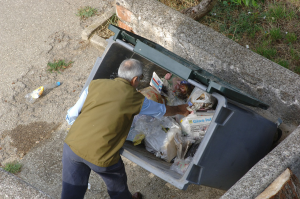 On his second day in a new country, Pedro slipped out of his parent’s apartment to visit the mall a few blocks away. His heart raced when he approached an old man bent over a garbage container on the sidewalk. The man had the exact body size and shape of Paa, Pedro’s grandfather. He tried to catch a glimpse of the old man’s face but he changed positions, keeping his back to Pedro.

Haunted by the image of the old man, Pedro’s plans to have a meal at the mall’s food court stalled at the entrance. A pang of remorse spun him around. With pounding heart, he retraced his steps in search of the old man but he had vanished. Pedro shuffled along the sidewalk toward the apartment. The experience made him homesick. His mind returned to his life back home, where he had left Paa in the hospital two days earlier.

Pedro and his parents had once lived with Paa. His father worked in the forestry industry and his mother worked as an assembly line seamstress for an international company. Paa worked as a self-employed handyman. He did not charge for his services to those he considered less fortunate, which accounted for more than half of the village’s population. His income kept him just above the poverty line.

A friend of Pedro’s father who owned a lumber-carrying boat helped to backtrack Pedro’s parents abroad to seek a better life. Their excitement soon turned to disappointment, when unscrupulous employers took advantage of their illegal status and paid them just enough wages to survive. They made sacrifices to send small amounts of paper cashback to Pedro and Paa every few months in greeting cards. Pedro picked up and mailed responses through the local post office.

Unable to afford city life on one income, they moved to the countryside. Paa cleared a plot of land in a forest a hundred yards off the main road. He built a small log hut with a roof of palm leaves. They subsisted on the garden they planted and the chicken they raised for eggs and meat. They moved their mailing address to the post office of the village where Pedro attended elementary school. He dropped by the village’s post office every day after school to inquire about the mail.

Each evening, Paa prepared supper while Pedro completed his homework. They ate together and discussed the day’s events. Paa cleaned up after dinner, allowing Pedro to rest for his two-mile walk to school. He packed supper leftovers for Pedro to take to school the next day, with fruit snacks for his return trip home.

Pedro’s excellent grades propelled him to a choice high school in the capital city ten miles away. The distance forced them to pay for transportation. They changed their mailing address to the city’s post office.

Paa erected a stall at the side of the road, from which he sold juices, fried chicken with chips, boiled eggs, vegetables, and fruit. The roadside business paid for their needs and allowed modest savings to grow for Pedro’s university expenses. Pedro contributed by working as a waiter in the city on evenings and weekends. He worked full time during the school holidays.

A letter arrived one day with instructions for Pedro to contact his father’s friend. They had arranged for his illegal passage the next evening to join them. The boat’s owner planned to sell the boat and retire after delivering one last load of lumber. Pedro hurried home with the news.

Paa handed Pedro the bottle of coins they had saved. Pedro did not want to leave him alone but Paa evoked a promise out of him that he’d fulfill his wish to use the money for university abroad.

Pedro arrived home the next day to find Paa’s stand crumpled on the ground. After checking the house, he grabbed the bottle of coins and boarded a bus back to the city to enquire at the hospital. They directed him to the Intensive Care Unit.

Shock swayed Pedro when he spotted his grandpa through a glass wall. With his head wrapped in a blood-soaked gauze, Paa breathed with the use of a lung machine. A nurse handed Pedro a piece of paper with a note in Paa’s handwriting. It said, ‘Keep your promise – go tonight.’…